Posted on March 2, 2020 by goodshepherdpt 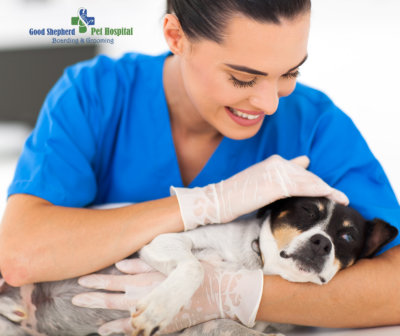 How to Spot, Treat, and Prevent

Giardia in Dogs
What is Giardia? Giardiasis is an intestinal infection caused by a protozoan parasite Giardia duodenalis. “Giardia is a simple one-celled parasitic species; it is not a worm, bacteria, or virus. The Giardia organism has two forms. A fragile, feeding form known as the trophozoite exists in the gut of the infected animal, while a hardy cystic form is shed in feces and can survive several months in the environment.

How is Giardia spread?
Giardiasis lives in the small intestine. Infected animals pass microscopic Giardia cysts in their stool, which can infect another animal if ingested. The most common source of Giardia is contaminated water. The cysts can survive for weeks in water or a cool, wet environment, but they may also be able to survive on an animal’s hair coat for some time.

Giardiasis can also be transmitted by eating or sniffing the cysts from contaminated ground. How do I know if my pet has Giardia? In most cases, a Giardia infection does not make pets sick. If it does, signs will appear 1-3 weeks after the initial infection and will likely include diarrhea, vomiting, and bloating.

The disease is usually not life-threatening, but in puppies and debilitated adult dogs, severe, watery diarrhea may occur that can lead to dehydration and death if left untreated.

How is Giardiasis diagnosed?
If your veterinarian suspects Giardiasis, a stool sample will be analyzed for the presence of giardia cell proteins.

How is Giardiasis treated?
Your veterinarian will prescribe oral medications to kill Giardia. If dehydration or severe diarrhea are present, supportive fluid therapies or additional medication support may be needed. Some pets may require follow-up testing or treatments depending on the severity of the infection.

Pets infected with Giardiasis should be kept away from other animals, children, or immunocompromised individuals.

Pet areas such as kennels and runs should be thoroughly disinfected and dried to kill the Giardia cysts and soiled bedding or blankets should be washed separately.

This entry was posted in Uncategorized. Bookmark the permalink.